It is with some trepidation that we offer a few tentative observations concerning the association between sexual activity and vertigo. To our knowledge, the world literature has remained rather silent on this subject. For students -- a good topic for research ? Nevertheless, as a result, the content of this page is based on a combination of consideration of mechanisms and clinical material from the author's dizziness practice in Chicago Illinois.

First, it is highly unusual for patients to come in stating that their dizziness began or was triggered during a sexual encounter. We think that this is mainly due to shyness, as a little bit of thought about dizziness would suggest that it should occur rather commonly.

General categories of disorders where dizziness might be associated with or provoked by sexual activity include:

Clinical observations and commentary on dizziness associated with sexual activity 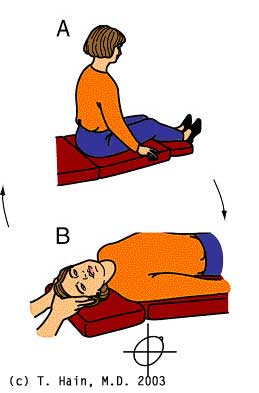 BPPV: is by far the most common cause of dizziness associated with sex. This occurs when positional vertigo triggered in the person who is supine or on their side during a sexual encounter. The illustrations above shows positions that typically trigger vertigo. Positions where the body is supine and head turned to either side are equally provocative. This situation nearly always is due to a very common ear condition -- benign paroxysmal positional vertigo (BPPV), which fortunately is generally easily treated. Similar considerations concerning positioning apply also to dental work, Yoga and Pilates -- adoption of a vulnerable position (such as "B" above), for a long enough time for debris to migrate from one part of the ear to the other (about 30 seconds) seems to be key factors predicting risk of BPPV. (Squires et al, 2004; Hain et al, 2005)

Straining causing dizziness: Persons with pressure sensitivity may become very dizzy during vigorous sexual activity, presumably due to the increase in intrathoracic pressure that may be coincident with straining and pushing. In this situation, surgical intervention to "fix" the problem may be indicated to improve the quality of life for the afflicted individual.

With respect to litigation, dizziness is one of the damages that can be associated with a head or neck injury. The dizziness can then lead to difficulty with or trepidation concerning sexual activity. It has been the author's observation, that contrary to the usual situation where individuals seem shy concerning reporting that sex is associated with dizziness, in situations where there is litigation ongoing as well as dizziness, the prevalence is more of the order of 50%. In some situations this seems to be simply the pressures of litigation overcoming shyness, and in others, a form of malingering -- difficult to confirm of course. Stress and depression, and the multiple prescriptions that commonly accompanies head injury may play a role too.

Cardiac conditions -- do not seem to be a common cause of dizziness during sexual activity. We suspect that this is due to a tendency for participants to accept as normal a rapid heart beat and a giddy feeling. We have occasionally encountered persons who lose consciousness during a bout of positional vertigo due to a profound slowing of the heart rate. We have never encountered anyone who has indicated that dizziness was accompanied by angina pain or an event that could be interpreted as being due to low blood pressure, in the course of sexual activity. So to summarize, this seems very unlikely.

Migraine - similarly, migraine associated dizziness does not seem to greatly interfere with sexual activity. Thus, while this is a theoretical possibility, so far it has been unaccompanied by any cases in the author's practice which has included many 1000's of patients. There is a migraine variant called "coital cephalgia". The pre valance is fortunately low -- 1/360 according to Nick and Bakouche (1980). Porter and Jankovic (1981) suggested that coital cephalgia was a migraine variant. This seems somewhat plausible given the hormonal fluctuations that are expected during sexual intercourse. We would also think that use of medications to improve erectile dysfunction - -generally vasodilators -- would make this much more common.

Hyperventilation -- Clinically this is not a substantial problem. We think that this is due to the fact that HVT induced dizziness is usually minor and fairly easily ignored.

Psychological factors: We have occasionally encountered women who are so disturbed by positional vertigo, that it prevents them from either participating in sexual activity at all, or prevents them from proceeding with procreation. We have never encountered this situation in a male patient. This situation generally seems to be more caused by anxiety than substantial vestibular disturbances.

Concerning medications used to improve erectile function such as the phosphodiesterase (PDE) inhibitors (e.g. Viagra, Levitra, etc), these drugs act on blood vessels and theoretically, might cause dizziness. For example, if the circulation to one's inner ear is reduced due to hardening of the arteries, the shift in blood flow associated with one of these drugs, might reduce availability of blood to the inner ear. This is very speculative at best.

Practically, hearing loss has been reported to be associated with Viagra in particular (McGwin, 2010). We know of no reports of vertigo associated with these medications, although we have encountered patients in whom an ED drug was often present in dizzy situations. In our clinical practice, vertigo associated with use of these drugs is an extremely unusual clinical situation -- the author of this page has encountered it only once in many 1000's of patient contacts. When it occurs, topical preparations that are not absorbed systemically are a logical method of treatment.

As is the usual situation with dizziness, the first step to sort out the condition.

A careful history is the beginning. While it has not been our experience that many patients will report dizziness associated with sex, they will nevertheless commonly report dizziness associated with particular head positions or exercise. During the history, in persons in whom procreation is being considered, one should attempt to gently determine whether or not there might be an anxiety concerning sexual activity, and if this is the case, consider further evaluation by a suitable specialist. In any case, one should also proceed to office testing.

Office(bedside) testing is the next step. One should also attempt to reproduce positioning of the head (Dix-Hallpike testing), as well as have the patient strain and hyperventilate, while monitoring eye movements with a video Frenzel goggle system. Persons who have psychological disturbances (i.e. anxiety or malingering), should have no substantial exam findings, or might refuse office testing -- usually claiming that the vertigo is so severe that a diagnostic evaluation is impossible. This is highly unlikely as with appropriate medication, any patient can be examined successfully.

Other than spontaneous and positional nystagmus testing as noted above, further laboratory testing is not always needed -- if a person has BPPV, one can simply proceed on to treatment. However, in situations where the diagnosis is not so clear, the tests above should be considered.

As there are several causes of dizziness associated with sexual activity, it follows that there are also many approaches to treatment. In most cases, and especially with positional vertigo, one can correct the underlying inner ear dysfunction and allow the person to go about life normally. Occasionally of course, individuals will instead find ways to modify the way that they go about their activity. In this case, it is still very helpful to know what triggers the vertigo, how long it lasts, and what can be done to mitigate it's effects.

Medication is generally not useful for dizziness induced by sexual activity. This is because most dizziness medication "slows one down", as most have sedative properties.