Mondini and related Malformations of the inner ear

The normal cochlea has two and one-half turns. A cochlear malformation consists of a membranous  abnormality, a bony abnormality, or a combination of these two. There is a complex naming system used for many of the radiological findings. The material below is abstracted from Schwartz and Harnsberger (1998). A general idea is that generally speaking, labyrinthine maldevelopment occurs earlier than cochlear issues, and while cochlear problems can exist by themselves, it would be rare to have a pure labyrinthine developmental problem. Here are the basics:

The majority of Mondini cases are bilateral. Many of these are genetic in origin (Chen et al, 2012). Unilateral Mondini malformations are not generally inherited. Mondini has been sometimes reported in association with numerous other named syndromes including Klippel-Feil, Wildervanck, Alagille, Waardenburg, Pendred, and DiGeorge.

This is a radiological diagnosis, generally made with a high-resolution CT temporal bone CT scan. Note that these scans should not be performed lightly as they entail considerable radiation. In other words, you don't want to do a CT scan of the temporal bone to screen someone with, for example, a sudden hearing loss. 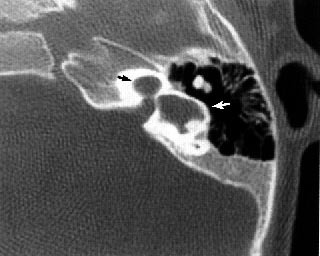 An example of a high-resolution CT scan of a Mondini malformation  is shown on the right (Strome et al, 1998). The black arrow shows a sac-like cochlea. The white arrow shows an amorphous vestibule without any defined semicircular canals. There are various other variant malformations including cochlear aplasia and hypoplasia, as well as others -- see table above(Sennaroglu and Saatci, 2002)

Often accompanying the Mondini dysplasia is abnormal communication between the endolymphatic and perilymphatic spaces of the inner ear and subarachnoid space. It is usually caused by a defect in the cribriform area of the lateral end of the internal auditory canal.  Presumably because of this abnormal channel, perilymphatic fistulae are more common in this disorder.

Nearly all persons with Mondini malformations are completely deaf on the affected side, but high frequency hearing can be present in some. While the hearing loss in these malformations is probably sensory in origin, the audiograms in these people sometimes suggest a conductive hearing loss -- this is probably related to relatively better bone conduction in some of these malformations than normal because of lower compliance between the perilymphatic and CSF compartments.This is similar to the situation in superior canal dehiscence. Patients with Mondini malformations sometimes benefit from cochlear implants (Turrini et al, 1997)

Persons with Mondini may have a progressive hearing loss during childhood, and may also be afflicted with a sudden deterioration secondary to internal rupture of cochlear membranes, in a way similar to thought occurs in Meniere's.

Patients with Mondni may, like patients with perilymphatic fistulae or superior canal dehiscence, experience vertigo from loud noises, or the "Tullio" phenomenon.

Nearly all persons with Mondini also have absent vestibular function on the affected side, but this cannot be relied upon. See below regarding present otolithic responses in the CHARGE variant.

Children with these malformations may also exhibit motor delay due to damage to the labyrinthine part of the inner ear (Bodensteiner et al, 2003).

There are many reports that patients with Mondini may develop recurrent meningitis as a result of ear infections communicating with spinal fluid. (e.g. Sharawat et al, 2019) They are also more prone to develop CSF leaks. (Caro-Osorio et al, 2018).

As in the Mondini malformation, the semicircular canals or otoliths may be preserved, there is a possibility of dizziness from a "sick" ear. In the author's experience, this usually occurs in early adulthood.

The reason for this is that accompanying the Mondini dysplasia is abnormal communication between the endolymphatic and perilymphatic spaces of the inner ear and subarachnoid space. It is usually caused by a defect in the cribriform area of the lateral end of the internal auditory canal.  Presumably because of this abnormal channel, perilymphatic fistulae are more common in this disorder.

Surgeons who are planning to operate on persons with a Mondini need to be aware and plan for the possibilty of a "CSF gusher"(Sajai et al, 2000). This means that due to the open communication between the inner ear and spinal fluid compartment, cerebrospinal fluid can "gush" out of an opened inner ear. It would seem to us that fistula "repairs", using conventional soft-tissue seals, are doomed to fail. To us, it would seem that the main options are between sealing the windows with cement, or simply a complete labyrinthectomy.

As mentioned above, some patients with Mondini respond to cochlear implant. It has also been suggested that obliteration of the endolymphatic sac may stabilize the progressive hearing loss that afflicts some Mondini patients.

This man with congential deafness developed dizziness as an adult.