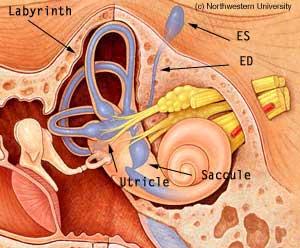 First described by Mondini in 1791, the Enlarged or just "Large" Vestibular Aqueduct syndrome" (EVA or LVAS) consists of enlargement of the bony compartment (vestibular aqueduct) that contains the endolymphatic duct (ED on figure above) that connects the endolymphatic compartment (blue above) to the endolymphatic sac (which lies just under the dura of the posterior fossa, ES above) (Corrales and Mudry, 2017). The ED contains endolymph. Valvassori and Clemis (1978) described 50 patients in 1978 with LVAS, diagnosed with tomograms, and noted that most of these patients had hearing loss.

Persons with LVAS not only may develop hearing loss as well as be unusually vulnerable to inner ear disease associated with head injury. Not all patients with LVAS have it as a hereditory condition. LVAS is the most comon radiographically identifed association with congenital sensorineural hearing loss (note that we didn't say it was a cause). Thus, LVAS is important to radiologists.

Presumably this vulnerability occurs because there is increased compliance (easier access) of pressure waves in the brain to the inner ear. Oddly though, this condition is basically the opposite of the situation in Meniere's disease, where it is classically hypothesized that the vestibular aqueduct (endolymphatic portion) is abnormally narrowed, but manifesting with similar hearing symptoms. It would seem likely that one of these mechanisms must be wrong. LVAS is also associated with renal tubular acidosis. (again, likely a genetic association).

Vestibular aqueduct diameter and hearing loss is highly correlated, according to Spencer (2012). This suggests that the pressure fluctuations experienced by the inner ear as a result of a larger vestibular aqueduct may cause hearing loss through wear and tear. It also suggests that surgical procedures aimed at increasing flow in the endolymphatic duct, such as for Meniere's disease, may be poorly concieved.

Sone et al (2015) using gadolinium enhanced MRI, reported that all of 6 subjects with LVAS had mild to severe hydrops.

Dogma states that head trauma is associated with progression of hearing loss in LVAS, but Alemi and Chan (2015) suggest in a meta-analysis that there is no data to prove that this is the case.

Many persons with LVAS have Pendred syndrome (Berrettini et al, 2005). SLC26A4 is the gene for "Pendred" syndrome (which includes euthyroid goiter). Additionally, SLC26A4 is considered to be the major involved disease in inner ear malformations associated with bilateral nonsyndromic hearing loss (Chen et al, 2012). In Chinese patients, SLC26A4 mutations were found in almost 75% of individuals with inner ear malformations such as EVA or Mondini. In another study of Chinese children with EVA, only 8/271 children had no mutation. Children with two copies did worse than children with one copy. (Zhao et al, 2013). Interestingly, there was no strong correlation between hearing loss and VA size, suggesting that the EVA may be an effect of the gene, which also causes hearing loss, rather than EVA being a cause of hearing loss. If this is true, then the dogma that persons with EVA should avoid contact sports may be inappropriate (as suggested by Alemi and Chan, 2015).

Audiometry: LVAS may cause a fluctuating sensorineural hearing loss as well as a conductive component. Persons with LVAS may have a large air-bone gap (suggestive of conductive hearing loss) (Merchant et al, 2007). This is proposed to be due to an enhancement of the bone component by a third window, following logic similar to that applied in superior canal dehiscence syndrome.

VEMP: Similar to SCD, persons with LVAS-EVA may have VEMPs in spite of conductive hearing loss (Zhou, 2010).

According to Zalewiski et al (2015), 45% of patients with EVA/LVAS had vestibular signs and symptoms, and 44% of tested patients had abnormal VNG test results. An increased number of vestibular signs and symptoms was correlated with the presence of bilateral EVA (P = .008) and a history of head injury (P < .001). Abnormal VNG results also correlated with a history of head injury (P = .018).'

Radiology: LVAS is defined on the temporal bone CT scan as a diameter greater to or equal to 1.5 mm measured midway between the operculum and the common crus. The operculum is the opening of the VA.Vijayasekaran et al (2007) reported that the 95th percentile for VA midpoint width was 0.9mm. According to Murray et al (2000), coronal CT scan is the best view for evaluating it in children.

However, coronal is not always available, and one can make measurements using either coronal or axial images. There seems to be quite a bit of "judgement" involved in making these measurements, presumably because the VA is shaped like a funnel and figuring out where to measure isn't so easy. According to Quan et al (2018), "At the midpoint, the mean (± standard deviation) vestibular aqueduct measured 0.61 ± 0.23 mm, 0.74 ± 0.27 mm and 0.82 ± 0.38 mm on axial, single-oblique and double-oblique images, respectively; at the operculum, the vestibular aqueduct measured 0.91 ± 0.30 mm, 1.11 ± 0.45 mm and 1.66 ± 1.07 mm on the respective images. " So lets see -- 0.61 + 2SD would be about 1.09. Quan et al (2018) also reported that "The morphology and dimensions of the vestibular aqueduct were highly variable among axial, single-oblique and double-oblique images". This suggests that caution is essential in making this diagnosis from temporal bone CT, and one must know one's midpoint from operculum. The 1.5 mm criterion seems reasonable.

The Enlarged vestibular aqueducts can also be seen on high-resolution MRI as shown above.

Conservative management, including avoidance of head trauma and contact sports, has been the mainstay of treatment. However, as mentioned above, this advice may be baseless.

Surgery to close the enlarged structure is feasible, but it frequently results in significant hearing loss (Welling et al, 1999). This would go along with the hypothesis that hearing loss is caused by the mutation itself, rather than the enlarged opening. (as suggested by Alemi and Chan, 2015).

Cochlear implants can be performed in LVAS-EVA, with caution to avoid the "CSF gusher"(Patel et al, 2018). This has been reported many times in surgeries on LVAS. (e.g. Pradhananga et al, 2015). The rationale for this is a difficult to follow as the vestibular aqueduct is not a conduit for spinal fluid (as is, for example, the cochlear aqueduct). These gushers may be due to other bony malformations associated with EVA that decrease the resistance of flow through the ear of spinal fluid (which is contiguous with perilymph).