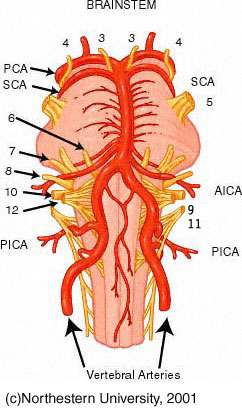 The main symptoms of SCA territory strokes are ipsilateral cerebellar ataxias (middle and/or superior cerebellar peduncles), nausea and vomiting, slurred (pseudobulbar) speech, loss of pain and temperature over the opposite side of the body. Partial deafness, tremor of the upper extremity, an ipsilateral Horner syndrome and palatal myoclonus have been reported. Clinically, this stroke may be impossible to distinguish from a partial AICA or PICA territory stroke. It is much rarer than either one. Ocular pulsion away from the side of lesion has been reported in SCA syndrome. Diagnosis of the SCA stroke is via MRI.

Prominent auditory symptoms are rare in SCA infarcts, but there can rarely be hearing impairment, which can be “occasionally” more prominent contralateral to the lesion because of involvement of the crossed auditory fibers of the lateral lemniscus (Luhan and Pollack 1953). In a study of 23 patients with SCA infarcts, Amarenco and Hauw commented that cerebellar and basilar artery symptoms predominated in their patients (Amarenco and Hauw 1990b). This conclusion was based on autopsy material.

It is surprising that there are not more hearing symptoms reported in SCA infarcts, as these infarcts can damage the inferior colliculus, a major integrating nucleus for the auditory system. The auditory findings may be simply missed being too subtle, as they may manifest as disturbances of central auditory processing.