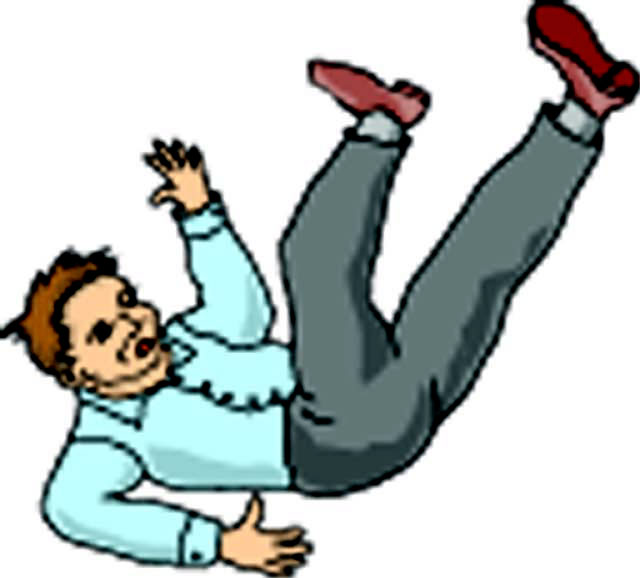 Drop attacks are sudden spontaneous falls while standing or walking, with complete recovery in seconds or minutes. There is usually no recognized loss of consciousness and the event is remembered.  It is a symptom, not a diagnosis, and it can have diverse causes. Sheldon (1960) reported that drop accounts accounted for about 1/4 of 500 consecutive falls in older patients. This estimate seems a bit high to us. Nevertheless, drop attacks are a very serious problem.

In most instances (64%), the cause of the drop attack is never definitively established (Meissner et al, 1986). About 12% are due to the heart (a variant of syncope), 8% due to poor circulation to the brain, 8% due to problems with both the heart and brain, 7% due to seizures, 5% due to the inner ear (Menieres disease -- called the otolithic crisis of Tumarkin), and 1%, due to psychological problems. Rarely, drop attacks are exaggerated startle reactions.

In our practice at Chicago Dizziness and Hearing, most drop attacks are due to Meniere's disease, presumably because of the large number of patients that we follow with this condition (i.e. more than 1000 in our database). Then patients describe a sensation as if they are suddenly in free fall, they desparately try to right themselves, and end up on the floor. Variants include "invisible hands", or "shoves" with nobody around to push. Injuries are very common. (the term "invisible hand of the market" was used by Adam Smith -- this is not the same invisible hand of course).

Drop attacks from Meniere's are more "active" -- the person involved actually ends up participating in the fall (because they feel as if they are flipped). Most other drop attacks are slower and are more of a "collapse" than an actively driven fall. The mechanism for drop attacks in Meniere's is likely a "popping" of a dimpled inner ear membrane as pressure changes in the ear. (Ozeki et al, 2008) Saccule testing such as the VEMP is reported to be abnormal in this situation, but the unusual type of VEMP required is not one that is commonly encountered in clinical laboratories. (Timmer et al, 2006)

Pace et al (2020) recently hypothesized that drop attacks might originate from perilymph fistula (PLF). While this is logically reasonable, practically we don't think this observation has much impact because of our inability to diagnose PLF.

Basically this boils down to heart, brain, ear, and psychological problems. These are the "horses" -- when you hear hooves, you look for horses, not zebras.

These are "zebra" causes --

There are a number of "one off" reports of entities within the ventricles such as colloid cysts (Zohrevandi et al, 2015), and choroid plexus cysts (Bansal et al, 2015; Pollack et al, 1995). These are diagnosed with MRI scans. Should not be your first thought.

There are occasional patients with Chiari who reportedly have drop attacks (Straus et al, 2009), but we have never seen this in our fairly large Chiari experience at CDH. We might be simply calling these patients "syncope", such as the classic "cough syncope" of Chiari, or perhaps just calling these entities a "fall".

A small number of drop attacks may be due to SCD (superior canal dehiscence syndrome) (Brandtberg et al, 2005) . As we have never seen this in our substantial SCD experience, we are dubious that they exist. It is difficult to see how SCD could cause an abrupt drop attack. SCD is diagnosed with a VEMP and a CT scan of the temporal bone (if the VEMP is abnormal).

Rare patients fall due to cataplexy (Egel et al, 2012). This should not be your first thought. Cataplexy is a variant of narcolepsy. Narcolepsy is diagnosed with a sleep study and the MSLT -- multiple sleep latency test. We think this is roughly 1/100'th as common as Meniere's drop attacks.

Vives-Rodriguez (2017) reported drop attacks in a case of "LG11 encephalitus". This is a "super zebra".

Drop attacks are reported in Migraine (Ishiyama) which of course can cause nearly any neurologic symptom reported in the literature as well. In our gigantic experience with migraine associated vertigo at CDH, we have never encountered this entity. We suspect that these patients had Meniere's.

RISK OF STROKE OR DEATH IN PERSONS WITH DROP ATTACKS

The stroke rate in persons with drop attacks is 0.5%/year. This rate is not significantly different than the general population.

Persons with drop attacks have far more fractures than the general population.

Drop attacks are very serious as they often result in falls and breakage of bones. Treatment is individualized according to the diagnosis. Because in many instances, no diagnosis is established, no treatment may be advocated.