Orientation of the otolithic organs• Function• Turnover of otoconia. •

The utricle is one of two "otolithic organs" in the human ear, the utricle and saccule. On the diagram above, the utricle are located in the vestibule, between the semicircular canals (5), and the cochlea (9). 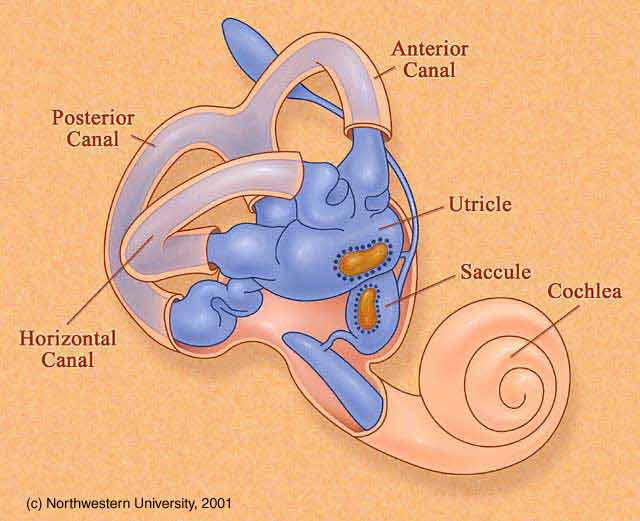 This figure shows a closeup of the inner ear. The utricle is contained within a swelling adjacent to the semicicircular canals, and the saccule is close to the cochlea. The black dots surrounding the utricle and saccule are the dark cells. 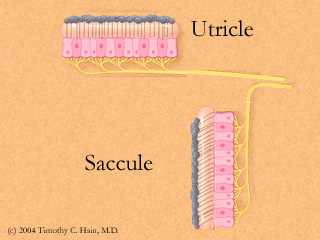 The otolith organs sense gravity and linear acceleration such as from due to initiation of movement in a straight line. Persons or animals without otolith organs or defective otoliths have poorer abilities to sense motion as well as orientation to gravity.

The schematic diagram above illustrates how they work. A set of hair cells are coupled to a mass of stones. When the stones accelerate, with respect to the hairs, they exert a shearing force on the hairs. This force is detected by the hair cells and sent to the brain via branches of the vestibular nerve. The utricle sends input to the brain via the superior division of the nerve, and the saccule, via the inferior division. There is considerably more complexity to the organization of the utricle and saccule, including different types of hair cells and detail to the sensory macule (patch of sensory cells) that we have omitted.

The otolithic organs sense motion according to their orientation. The utricle is largely horizontal in the head, and largely registers accelerations acting in the horizontal plane of the head (called the axial plane by radiologists). The saccule is largely vertical, actually parasagittal, in the head, and registers accelerations in the vertical plane (called parasaggital or coronal plane).

The motion sensation from the otoliths is used for a large number of reflexes:

Damage to the otoliths or their central connections can impair ocular and body stabilization (Lempert et al, 1997).

The bilateral symmetry of the otoliths may provide a method for adaptation to loss of angular rate sensors (the canals), as centrifugal force on the otoconia provides a second method of signalling rotation. It also seems possible that intra-vestibular conflict -- otolithic sensors suggesting that the head is turning at a different rate than the canals, might be the reason for some types of motion intolerance.

At the present writing, it is not entirely clear if otoconia turn over or if they degenerate over life. If they degenerate over ones lifetime, this might explain why balance inevitably worsens with time, and also explain why persons after head-injury never quite regain their former balance function. On the other hand, it seems unlikely that a highly vulnerable system like the otoliths would be designed without some method of repair. Lets review some of the data.

The otoconia are made of calcium carbonate (CaCo3) combined with a protein matrix protein (about 40% of the volume). Calcium carbonate is also a constituent of "limestone", so otoconia are essentially a mixture of stone and a protein - -something like concrete with straw mixed in. They have a hexagonal symmetry. In birds and mammals, the "calcite" form of calcium carbonate is used. The matrix protein in birds and mammals is called otoconin-90. Otoconia of humans are very small -- ranging in size from roughly 3 to 30 microns -- averaging about 10 microns. Without a high-resolution microscope, one would not be able to see the crystalline structure. Otoconia of fish may be much larger.

Otoconia are initially formed early in life during embryogenesis and their formation is completed in early postembryonic development. In mice, they are completely formed by post-natal day 7.

The outer, calcium containing part of the otoconia clearly turns over, but it is not clear if the inner part (the matrix) can be replaced in humans. This is important because the otoconia can fall off into the inner ear. When they do this, they are probably dissolved and reabsorbed by the "dark cells" of the labyrinth (Lim, 1973, 1984), which are found adjacent to the utricle and the crista, although this idea is not accepted by all (see Zucca, 1998, and Buckingham, 1999).

Progressive degenerative changes of aging otoconia and also damage to otoconia mediated through ototoxic drugs such as streptomycin have been well documented (Ross et al, 1976). This is evidence against a repair process, as if one did exist, there should not be continued deterioriation.

Supporting this idea (that otoconia are never replaced) is a NASA study by Parker et al, in which Guinea pigs were centrifuged (to pull off their otoconia). Some of them were sacrificed acutely and others at 6 months. According to this study report (Parker et al, 1968; Parker et al, 1965) otoconia had not regrown (in guinea pigs) at 6 months. They wrote "There is no adequate evidence from this series of 12 animals that any particular reparative process occurs to explain the return of the righting reflexes after exposure". They speculated that perhaps the gelatinous layer, by itself, could function without the otoconia. This seems very unlikely to us. It would be interesting to see this study replicated.

In Benign Paroxysmal Positional Vertigo (BPPV) , a common vertigo condition, dizziness is thought to be due to debris, probably otoconial, which has collected within a part of the inner ear. Testing of the utricle has been reported abnormal in BPPV (Hong et al, 2008).

While otoconia are generally attributed in the literature as being the cause of BPPV, there is no particular reason why otoconial matrix, or fragments of other parts of the inner ear might not accumulate, but it would seem likely that such debris would be rapidly disposed, while small stones (otoconia), might persist.

Some controversy exists about disposition of debris as some authors (e.g. Zucca et al), feel that stones might dissolve rapidly. One would think that stones surrounded by a matrix would persist for years.

Damage to the otoliths:

It seems likely that the same processes that damage the ear in general -- damage the otoliths. However, until recently, there was no method of measuring the damage. Some work is now being done using VEMP testing to quantify otolithic input (saccule). For example, Hsu et al (2008) reported that the saccule (VEMP) response exhibits a temporary threshold shift to noise, similar to cochlear hearing hair cells. It seems very likely to us that the saccule might be vulnerable to noise.