Acoustic reflexes measure the stapedius and the tensor tympani reflex generated eardrum movement in response to intense sound. They can be helpful in checking for particular types of hearing loss in situations where patient reliability is questionable. They also occasionally point to central nervous system pathology.

According to Margolis and Levine (1991), acoustic reflexes were first observed in dogs by Hensen in 1878, who observed responses of both the tensor tympani and stapedius to sound. The first report of the acoustic reflex in humans was made by Luscher in 1929. The first device used for clinical measurements was developed by Metz in 1946. Routine clinical measurements became feasible in the 1960's when the tympanometer became commercially available.

Acoustic reflexes have fallen out of favor.

For the most part AR testing causes more trouble than it is worth. Perhaps in response to this, in 1990 the American Speech-Language-Hearing Association's revised guidelines, "Screening for Hearing Impairment and Middle Ear Disorders," deleted the Ipsilateral AR as a screening parameter. (Sells et al, 1997).

We have many times have been presented with an abnormal AR, with no correlating illness. We would not want to be in the situation of doing a 100's of routine AR's, getting 99 that are false positives, developing a practice of ignoring AR's, and then getting "burned" when one patient does have a correlating illness. In other words, AR have a very large number of false positives, because of these considerations, in our opinion, AR are best saved for particular clinical situations where they have something very useful to contribute (see sections below).

In the years prior to when MRI was available, AR had a bigger role to play. However, in the current environment where MRI of the IAC is regularly used, there is relatively little clinical utility to AR left.

Methodology of the acoustic reflex.

A typical setup to measure the acoustic reflex is a tympanometer that delivers both a sound to either ear as well as is capable of measuring the admittance of the tympanic membrane. There are a lot of terminology to master here.

Admittance is the reciprocal of impedance (well that was helpful right ?). For those more used to electricity than sound, impedance is a measure of the opposition of a circuit to the flow of current, taking into account both static effects (called resistance) and dynamic effects (known as reactance). Reactance may be from mass (inductors) or springs (capacitors).

The units of admittance are mhos (or siemens).

Acoustic "immittance" is a more generic term referring to either impedance, or the admittance, according to the ASHA working group (2014). In other words, "immittance" is a vague term denoting either how easy or how hard it is for sound gets into the ear.

For acoustic reflexes, a "probe" stimulus, such as a single frequency or broadband noise is combined with a reflex-activating stimulus. In the "classic" procedure, one test yields changes in a single measurement (e.g. admittance) at a single pure tone (e.g. 226 or 1000 hz). Higher frequencies are used in infants. The reflex is measured at the peak tympanometric pressure. The response is usually bilateral, which means that presenting the activator (see below) usually elicits a response in both ears.

The reflex is detected by detecting a decreased admittance of the test ear, usually 0.02 mmho (Schairer et al, 2013). As admittance is a measure of how much sound gets into the ear, this means that less sound gets through and more is reflected back.

Normally the reflex does not decay. The classic sign of a 8th nerve lesion is a rapid decay of the reflex for frequencies of 1000 Hz and below. This restriction to lower frequencies is due to the fact that even normal ears show decay for higher-frequency signals. (Cook et al, 1999)

When thresholds are measured, the test is called the "acoustic reflex threshold" or ART test. It would be imprudent to look for higher than normal thresholds, as the sound intensity for the conventional AR test is already high (Hunter et al, 1999).

Tonal thresholds can be used to identify functional hearing loss when the threshold is greater than 55 db. In other words, pretended hearing loss can be detected by noticing that the "deaf" ear has an acoustic reflex. (Gelfand, 1994)

Reflexes that are present at abnormally low sound input levels are attributed to "recruitment" with a cochlear site of lesion. In reality, this is just a supposition on the part of the interpreter -- all they really know is that the reflexes are present at low thresholds, and not the cause of the phenomenon.

Conventionally it is held that the input to the AR is hearing (8th nerve) and the output is the stapedius muscle (7th nerve), with a smaller and later contribution from the tensor tympani (5th nerve). There is an ipsilateral and a contralateral pathway.

Ordinarily, there is little consideration made of the tensor tympani's contribution to the AR, although it is a similar reflex but mediated through the 5th cranial nerve rather than the 7th cranial nerve. There are some reports that document a contribution of the tensor tympani to the AR (Stach et al, 1984; Jones et al, 2008), and thus it seems possible that this neuroanatomy has been generally ignored in most discussions. The issue has been debated periodically, with the general conclusion that in most individuals, the reflex is from the stapedius alone (Margolis and Levine, 1991). One piece of evidence is that in otosclerosis, the reflex is commonly absent. As the tensor tympani is generally not impaired in otosclerosis, this implies that the AR requires the stapedius. Nevertheless, "usually" is not the same as "always", and in persons with clinical disorders where there is low pitched sound induced tinnitus, it is difficult to imagine of any other mechanism than sound sensitivity of the tensor tympani. Additionally, acoustic reflexes can be obtained from some patients with "Bells Palsy", a disorder of the 7th nerve which paralyzes the stapedius (Stach et al, 1984). These responses are later and weaker than in persons with preserved 7th nerve function. Continuing onward ...

The contralateral pathway goes in to the 8th nerve and synapses in the cochlear nucleus, but then is transferred across the trapezoid body to the superior olive, and then to the 7th nerve nucleus and stapedius.

There is some interesting anatomy concerning the pathway of the 7th (cranial nerve). The pathway of the 7th nerve is such that it goes from the brainstem through the internal auditory canal, and passes through the region of the inner ear before going to the rest of the face. The most common location for injury to the 7th nerve is at the stylomastoid foramen, which FOLLOWS the take-off for the stapedius in the ear. Thus, the most common type of 7th nerve facial palsy (idiopathic peripheral 7th nerve palsies are called "Bell's palsy") will have a normal AR. On the other hand, the 7th nerve palsy that is associated with acoustic neuromas (and their surgery) is pre-inner ear, and should "knock out" the AR.

Reflexes that are present at abnormally low sound input levels suggest "recruitment" with a cochlear site of lesion. Of course, this is just a supposition on the part of the intepreter. All they really know is that the reflex is present at low levels.

One would expect that persons with tensor-tympani myoclonus elicited by sound might have low threshhold AR. We are not aware of any investigations of this idea, perhaps because the dogma is that the AR is a stapedius reflex.

Practically these are "obsolete" observations - - CNS lesions are simply not diagnosed using AR, as we have far better methods (mainly MRI scan). Still, here are the classical patterns, developed for individuals with hearing loss:

Shimazu et al (1996) reported that patients with ALS (some of whom presumably have weakness of their stapedius) due to loss of brainstem motor neurons, were not diagnosable with AR. In particular, "All patients showed normal reflex decay test results." However, "the patients with bulbar type ALS showed significantly longer latency, C50, and retraction time (D50), and significantly lower amplitude than control subjects. Three types of abnormal reflex waveforms (polyphasic, abnormally delayed retraction, and abnormally early retraction) were noted in six patients". This general observation is pretty reasonable -- not much of an effect, but some trend towards a reduced response from a weakened muscle.

Yamane, M. and Y. Nomura (1984) reported on 17 patients with motor neuron disease (MND), 11 with myasthenia gravis (MG), and 3 myotonic dystrophy (MD). "The MND group showed a lengthened mean reflex latency (L1). " One would not think that ALS would affect the timing of muscle responses.

Canale et al (2016) reported that "Amplitude was lower in both the amyotrophic lateral sclerosis-bulbar and the amyotrophic lateral sclerosis-spinal patients than in the controls (p < 0.05) and rise time was longer in both patient groups compared with the controls (p < 0.05). " This is somewhat reasonable given the assumption that the muscle is weakened.

So to summarize, we have several studies of stapedius reflexes in ALS,, all concluding different things. One would expect that the reflex would be lower amplitude, and perhaps it would decay faster as the muscle is weaker. As ALS is easily recognized from muscle wasting and atrophy in larger muscles, these observations have little importance,.

The simplest possible situations are when the input (8) or output (7) are gone. A third pattern occurs when the crossover is gone (no contras). This is not so difficult, and we think it best to "figure it out on the fly". Note that the way that reflexes are organized in a table may be idiosyncratic, and you should put together an interpretation table based on how they are presented to you. Rapid decay suggests central.

The table below shows one method of organizing output, organized by contra and ipsi. There are 20 numbers here !

Example 1 : No hearing on L -- everything from left side input is gone. This causes an alternation between ipsi/contra patterns when one forms a table organized by measured ear.

Example 2 : No output on one side (7th nerve) prior to inner ear on L - -everything measured on left side is gone. See comments above in anatomy section concerning location of lesions in 7th nerve. In the most common type of facial palsy (Bells palsy) or in most "central" 7ths, AR should be normal.

Example 3: Midline brainstem disturbance. This causes both contra reflexes to be absent. This pattern is essentially obsolete as we would never use AR to diagnose brainstem disease. Still, the idea is that there is a lesion in the transfer of the sound from one side to the other.

The Stapedius Reflex by itself 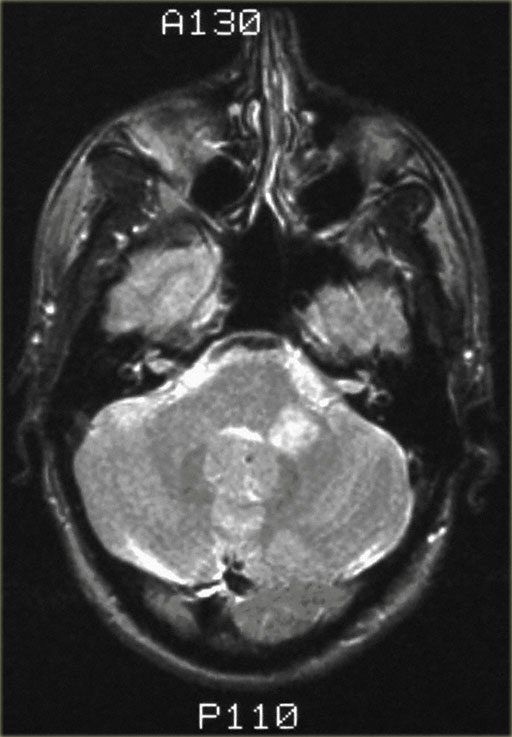 Because the stapedius reflex involves several nerves and brainstem connections, it can be abnormal in a variety of situations that may not necessarily impair hearing. Cantrell and others reported abnormalities in neurological disorders (Cantrell, 1979).

Central case example: A 40 year old man was well until he was involved in an auto accident. Two days later he developed diplopia and a rotatory type vertigo. On physical examination he had clear spontaneous nystagmus, a fourth nerve palsy, and mildly decreased hearing on the left side. Audiometry documented mildly impaired hearing on the left, but acoustic reflexes were abnormal with very rapid decay on the left side. ABR responses were also very abnormal on the left. An MRI scan documented a lesion resembling an MS placque in his left cerebellar peduncle area, just behind the 8th nerve (see figure to right). His symptoms resolved spontaneously and he has had not further neurological complaints in 5 years of follow up. COMMENT: This was most likely a demyelinative lesion resembling transverse myelitis. The abnormal reflex decay pointed towards a central lesion.

The acoustic reflex has been very well studied, and as of 2014, there were more than 600 papers in Pubmed with "acoustic reflex" in their title.