Gaze evoked nystagmus is the involuntary movement of the eye that appears after attempting to move the eyes to a new place in the orbit. It is thought that the brainstem produces a velocity command which moves the eye to a new position and is also sent to a "neural integrator", which converts it into a position command needed to hold the eye in place, and counteract elasticity of the orbit that attempts to move the eye back to the center position.

The neural command then consists of a "pulse" of velocity, followed by a "step" from the neural integrator. Disorders of the "step" cause the eye to drift towards the center (usually), which is called centrifugal beating nystagmus, but occasionally it may move outwards (centripetal beating). It is probably clearer just to say that the nystagmus beats outward, or inward.

Ideally the neural integrator has a gain of one -- meaning that it perfectly integrates the velocity signal and holds it there forever. Practically though, the neural integrator is not perfect, and there is centrifugal drift. Occasionally, the integrator is too good, and the gain is > 1. In disease processes, as well as from side effects of many medications, it is common for the integrator to have a lower gain, causing the eye to drift back rapidly towards the center.

This is often pictured as a low pass filter, consisting of an integrator having negative feedback around it. The above figure was created using "R", using a 20 deg/sec position input, a "leak" proportional to the last eye position, and a reset every 50 msec. See this page for the R code.

Optican and Zee (1984) developed a more elaborate systems model shown above of the neural integrator. Although this looks complicated, by splitting if up, it can be understood,.

The bottom connection with 'b', stands for the burst (sometimes called pulse) of velocity firing that drives the eyeball (here called the plant) to a eye position, E.

A "simple" simulation of an unstable neural integrator in R is shown above. Note that the eye position increases rather than drifts back towards zero. See this page for the R code.

Disease processes might reasonably reduce 'k' which is likely related to polysynaptic pathways. It would seem unlikely that disease processes could increase 'k', although this hypothesis would be needed to explain the rare "centripetal nystagmus" cases. Just increasing "T", without readjusting 'k' lower would be another way to make the integrator gain too high and elicit centripetal nystagmus.

There are several factors which contribute to the amount of GEN. What we are really talking about, implicitly is the idea that there are several subsystems that contribute to maintenance of eye position. Each of these systems contributes force, and the net movement of the eye is related to the balance of force.

With respect to orbital elasticity, #1, for the most part, this is generally assumed to be constant across most individuals, although there are clearly individuals where stiffness is too high (such as in Duane's syndrome). Roughly, force is proportional to E-E0, and thus eye acceleration = K(E (where K is the spring constant of the ocular muscles). 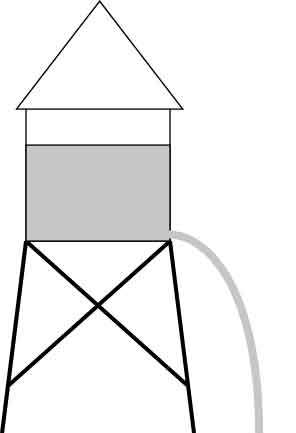 The second force relates to neural firing designed to counteract the orbital elasticity. This is envisioned as a neural "integrator", that creates a holding force to counteract the force due to orbital elasticity. The neural integrator is the dominant part of the gaze control system as the eye muscles are very powerful compared to the forces of orbital elasticity. Using an mechanical analogy, the integrator is like a tank that holds a fluid level proportional to eye position, but has a leak at the bottom. When the tank is full, the flow through the leak is high, when it is nearly empty, the leak doesn't do much of anything. The rate at which fluid declines in the tank, or in other words, eye velocity, is proportional to eye position. This is called the "leaky integrator" and structures in the brainstem have been found that are tentatively the localization of the neural integrator. Central disorders, particularly those involving the cerebellum are associated with greater leaks, and thus centripetal drift. This equation is formulated in terms of eye velocity, Edot, which is proportional to Eye position.

A third force, little considered, but important to understanding gaze is the "rebound" nystagmus mechanism. As a person continues to hold gaze in spite of drift back towards the center, the speed of the drift ordinarily slows down after about 10 seconds. Then when one looks back to the center, the eye drifts toward the previous location of gaze holding. This is thought to be due to a negative feedback process where a "rebound" integrator charges up, and then discharges when back to center.

A fourth force relates to how proficiently the patient can use visual tracking mechanisms such as pursuit or optokinetic responses to offset and eliminate drift, even though it is self-generated. A person can have GEN in the dark, but not in the light, if they have good tracking. This can be a very huge impact on persons with congenital nystagmus where it increases the nystagmus, but ordinarily presumably it reduces nystagmus. This system is generally very poor in persons with cerebellar disorders. On VENG's, we don't think it is necessary to record GEN in the light, because this information is obtained in the saccade test. However, we do think it is prudent to record GEN (and rebound) in the dark.

These factors are based on ideas about physiology.

Although conventionally, GEN is viewed as a consequence of orbital elasticity, with velocity proportional to eccentricity from the effect of the neural integrator and it's leakiness, (i.e. V=K*E), this single parameter framework does not capture all of the observed behavior -- nystagmus may not only vary with eccentricity, but the shape of the decay may vary as well. Or to put this into mathematical terms, one needs more free parameters than one can get from a simple neural integrator. . In the discussion above, one might reasonably need 4 or more parameters -- more than we can usually identify.

To assist in curve fitting, Romano et al (2017), introduce a formula with more parameters, namely V=(k2/k1)*tan(k1*E). By introducing a second parameter, k2, this function can adjust both the scale with k2 (which is the same as K above), and introduces k1, which allows for a tangent shaping function. This is an expedient of these authors, with an unclear correlation to physiology.

As developed above, there are many sources of forces that control eye position, and one must mainly consider the "neural integrator", but also think of visual tracking and the rebound process.

Because the relative contribution of these forces are normally unknown, and furthermore there is generally only an "eyeball" estimate of eye velocity , the judgment that a patient has an abnormal amount of GEN is usually a qualitative one, based on the observation that the patient has nystagmus on gaze in one direction, but none in the other, or nystagmus for unusually small displacements from center.