An overlapping page is found under symptoms/: visual. We apologize for the overlap and are attempting to collapse these into one.

The core dogma that explains visual vertigo from visual dependence is that one's idea of where one is in space is based on input from the eyes, the inner ear, the feet, and one's idea of where one should be in space (this "sense" is often forgotten). Normally people "integrate" together these 4 streams of input, using them to produce an estimate of where they are as well as where they will be in the near future, and use this to formulate their actions designed to avoid falling over. A simplistic way of viewing this is to consider this process as "weighting" -- as if one were adding together all of the sensory inputs, normalizing them somehow, and then producing a blended response. In reality, this is likely done using a slightly more complex process -- probably involving an internal model (see section below on sensory integration). As some senses are more salient than others according to the context, normally it is assumed that people rapidly switch from being "dependent" on various senses.

Visual dependence is the general term for persons who have increased their weighting of vision (considering that one may choose between eyes, ears, feet, and internal idea of where one is in space), and hold on to this weighting even when it is not especially relevant. This is usually thought to be due to lack of confidence in vestibular or somatosensory (body sensation) input.

Maire et al (2018) offered the opinion that visual dependence can be triggered by:

Note that somatic sensation loss is not included in this list, although logically one would expect that there would be up weighting of vision in persons with a peripheral neuropathy. There is evidence that peripheral neuropathy increases visual dependence however (Razzak et al, 2016) These authors wrote "findings still suggest greater but masked postural visual dependence in diabetics faced with postural challenging situations due to subclinical vestibular deficits. They also indicate that diabetics may be vulnerable before any clinical signs of peripheral neuropathy arise to falls on unstable surfaces especially in poorly lit areas, and may require to employ other complex postural tactics such as stiffening to maintain their balance."

Sailing et al (1991) observed that " "In patients with a vestibular lesion the authors observed more frequent elevated values in a lateral direction, a marked destabilization of the posture on the foam rubber and effective use of the added visual feedback. Cerebellar patients were unable to use effectively the visual biofeedback for stabilization of posture. They were characterized by an obvious increase of stabilometric parameters in both directions and under all circumstances. So in other words, there should be a strong sensitivity to vision in vestibular patients (a visual dependence), and no impact of vision (bad with or without eyes open), in cerebellar patients. This makes sense given that one might substitute another sense for a sensory disorder like vestibular loss, but for a central balance disturbance (cerebellar), sensory input might not be very effective.

Visual dependence may increase with age -- possibly due to aging of the visual system (Jamet et al, 2004), and aging of compensatory systems (Paige, 1992).

How does one measure visual dependence ?

Usually it is with tests that are vulnerable to cognitive bias such as "psychophysics", or posturography. An example of psychophysics is the observation of Cousins et al (2014) suggested that visual dependence using the Rod/Disk test was associated with high levels of persistent vestibular symptoms after vestibular neuritis. Both psychophysics and posturography are very much dependent on cooperation. This makes assessment of visual dependence vulnerable to cognitive state, including those who are involved in malingering. It also makes research studies of visual dependence very vulnerable to bias. Of course, psychological studies of nearly anything are usually difficult to replicate.

Maire et al (2018) suggested that visual dependence should ideally be measured with:

Only the posturography test is commonly available.

The confounding problem of "phobic postural vertigo" and "PPPD".

Perhaps because of these problems with measurement, visual dependence and visual vertigo has been mixed up in the literature with psychiatric terms such as "phobic postural vertigo". (e.g. Brandt, 1995; Pollak et al, 2003). This was then replaced by "CSD", and more recently, the term used for the same entity is "PPPD". In essence, the thesis of these writers is that visual dependence is largely due to psychological factors, although some suggest that these conditions are actually physical conditions (Maire et al, 2018). This is difficult to understand given that these conditions -- CSD and PPPD -- have no measurable sensory or motor deficits.

Eckhardt-Henn et al (1997) stated that "It becomes obvious that phobic postural vertigo is a generalizing term which encompasses different forms of psychogenic vertigo. The authors plead for a more differentiated diagnosis and subgroup oriented classification of vertigo caused by psychiatric disorders. " We agree.

While there is no doubt that anxiety or phobia can cause reweighting or upweighting of senses, the lack of a measure for visual dependence that has no psychiatric component, we think, has caused an overemphasis on psychological elements and underemphasis on physiology.

Visual dependence is a subtype of the general category of "sensory integration disorders". In order to talk about this we have to make a diversion into systems physiology.

(This section is not meant to be a discussion of the "sensory processing disorder", or SPD, which includes a variety of sensory integration disorders, and is felt to be either developmental or related to autism. SPD can include tactile and sound sensitivity, but rarely includes photophobia) (Fernandez-Andres et al, 2015)

Estimation of self and external motion

A mechanism is needed that combines sensory inputs, weights them according to their relevance and reliability, and provides a reasonable estimate of orientation in space, even without any recent sensory input. In engineering terms, we are discussing an “estimator.”

Navigating the space shuttle involves similar problems. The shuttle has dozens of sensors and motors. Some sensors respond quickly, and some slowly. They may differ in accuracy, scaling, coordinate frame, timing, and noise characteristics. No single sensor can provide a complete picture of the shuttle’s state. A mechanism is needed to integrate sensor output and to develop an internal estimate of the state of the system (i.e., position, velocity, acceleration) in order to keep the shuttle on the desired course and heading. 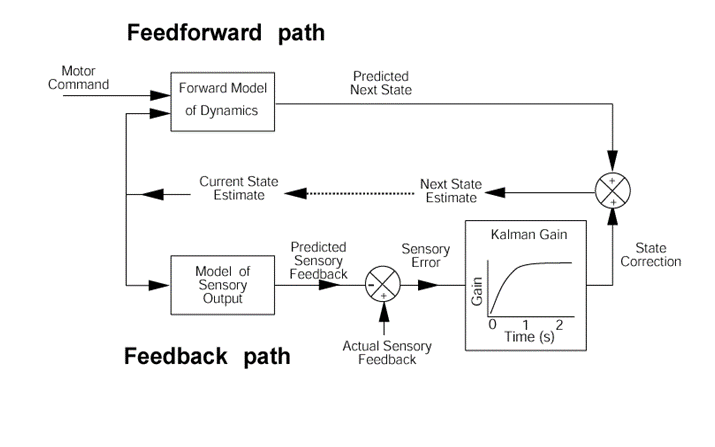 The engineering solution to this problem developed out of work performed by Kalman and is often called a Kalman filter. It is also commonly called an “optimal estimator” or an “internal model.” There is considerable evidence that mechanisms similar to Kalman filters are used for human sensorimotor processing.

The Kalman filter is far more powerful than a simple reflex. Several key concepts must be considered before one can understand how it is superior.

Overall, this sort of mechanism is clearly far superior to vestibular reflexes: Although not as fast, it can be far more accurate, it functions even in the absence of sensory input, and it is modifiable by experience and rehabilitation.

Visual dependence and how it relates to sensory integration disorders.

With this background, it is now possible to see why visual dependence is so common. We all use internal estimators that combine sensory information into a best "estimate" as to the self and world motion. These estimators consider several streams of input -- visual, vestibular, body sensation, and internal knowledge. When vestibular sensation is unreliable, our internal estimator adjusts the weighting of other senses.

Usually this is a good idea. Sometimes though, it gets people into trouble. When vision does not correctly reflect self or world motion, visual input can create dizziness. Thus visual dependence is a sensory integration disorder.

A starfield simulation that illustrates optic flow is shown below This program was written by David Inglesias (see Jsfiddle: http://jsfiddle.net/ditman/8Ffrw/). A full screen version is here:

The brain must separate out visual motion related to self movement from environmental motion in order to remain well oriented in space and to determine whether other sensory inputs such as the ear and legs are accurate. Persons who have impaired vestibular inputs may inappropriately depend on visual input, and confuse environmental movement with self motion. Most people who drive have experienced the illusion of movement when they are stopped at an intersection, and another car starts to slowly creep forward. This is an example of environmental motion being confused with self motion.

Motion sickness is correlated with vection. Vection is the sense of self-rotation in stationary observers induced by rotation of the visual surround. Vection can also be induced by expanding or contracting visual flow (e.g. looming or receding). Bubka et al, 2008. According to Nooij, for horizontal (yaw) stimuli, the greater the vection, the greater the motion sickness. (Nooij et al, 2017). The same first author also reported that vection was correlated with OKAN, which implies greater velocity storage (Nooij et al, 2018). On the other hand, for roll stimuli, Wei et al (2018) reported the opposite -- "Allocating less visual attention to central visual field during visual motion stimulation is associated with stronger vection and higher resistance to motion sickness. " One would think that given these two contradictory findings, vection must not be the independent variable.

While these sorts of symptoms are often treated with vestibular rehabilitation, it is not entirely clear how effective this treatment is.

Some people with vestibular disorders become unable to work on computer screens. The precise reason for this is not entirely clear, but some have speculated that it relates to flicker (refresh rate -- see the VEDA newsletter, Vol 16, #4, 1999). According the authors of the VEDA newsletter (optometrists), one should use faster refresh rates, dim and small displays (such as laptop displays), and make sure that your vision is otherwise normal. We have found that some people do better using projection systems -- the combination of a large "screen" and a LED type projector can be useful.

Photosensitivity (photophobia) -- is not the same as visual dependence.

Sometimes photosensitivity/photophobia also is found in people with dizziness, especially after head injuries. Light sensitivity can get mixed up with sensitivity to visual motion, e.g. visual dependence, which can be upregulated in persons with unreliable vestibular systems.

Photophobia is not at all specific to migraine however, and can also accompany migraine imitators such as meningitis, and vertigo imitators such as Cogan's syndrome. Dry eyes is another common cause of photosensitivity (Digre et al, 2012). This is different than visual dependence, and of course different from the discomfort that migraine sufferers experience from bright lights.

Photophobia is rarely reported in persons with "sensory processing disorder". This term is vague and we think it just translates into "I have no idea what is wrong with you".

"Irlen syndrome" -- this is a questionable visual vertigo syndrome.

This is a mainly theoretical discussion about treatment. There are many potential avenues