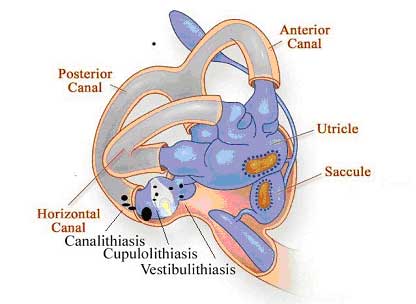 BPPV (benign paroxysmal positional vertigo) is presently generally accepted to be due to dislodged particles from the utricle.The utricle is one of the two otolith organs. There are several possible sites within the inner ear where particles can accumulate. The purpose of this page is to explain these terms and give some general orienting information. More detail can be found in Squires et al, 2004, and in Hain et al, 2005.

This is thought to be the cause of most BPPV. Debris is loose within the fluid filled pathways of the inner ear. When the head is repositioned with respect to gravity, the particles move to the new lowest portion of the inner ear.

This causes a "nystagmus", or jumping of the eyes with the following features: Here we are discussing debris in the posterior canal.

In theory, there might be canalithiasis involving any of the semicircular canals (or several at once). Each canal produces a different vector of nystagmus --

This is thought to be unusual (less than 5%). In our "dizzy" practice database of about 25,000 patients, as of 2019 only 8 are diagnosed as cupulolithiasis. So it is probably exceedingly rare.

The typical nystagmus of cupulolithiasis is thought to have the following features:

Cupulolithiasis was found on pathology of autopsy specimens made by Schuknecht and Ruby in three patients who had BPPV during their lives (Schuknecht 1969; Schuknecht et al. 1973). Moriarty and colleagues found similar deposits in 28% of 566 temporal bones (Moriarty et al. 1992).

If cupulolithiasis is suspected, it seems logical to treat with either the Epley with vibration, or alternatively, use the Semont maneuver, perhaps also with vibration. We are not aware of any studies using the Foster maneuver with vibration, but one would think this might be equally productive (or unproductive). There are no studies of cupulolithiasis to indicate which strategy is the most effective. Experimental models in frogs suggest that vibration is more effective than using gravity (Otsuka et al, 2013). In other words, the Epley, Gufoni or Semont without vibration are unlikely to be as effective as any procedure including vibration.

One would expect that cupulolithiais (which is very rare), might be more common in persons who have gone untreated for long periods of time, giving the debris more time to adhere to the cupula.

The prevalence of this condition is unknown. The conjecture is that debris is on the "vestibule" side of the labyrinth, rather than within or on the canal side. Debris might be either attached or loose. If attached, the pattern is identical to cupulolithiasis.

Pathologic studies of BPPV have found roughly equal amounts of fixed debris on either side of the cupula (Moriarty et al. 1992), suggesting that loose debris might also be found on either side. If loose, then there should be a mixture of cupulolithiasis and canalithisis (see below). Very little is written on this condition, although Buki published a paper suggesting that there was a prominent trunkal movement (2014).

For head position where gravity is directed away from vestibule (and towards cupula). Only the posterior canal is likely to have much of an incidence of this, as for the other canals, the canals are normally higher than the vestibule.