This is the medical history of a patient with Cogan's syndrome, as related by the patient herself.

At age 21 I suddenly lost my balance while returning to my office from lunch. At the office, I laid down until a coworker drove me home. My family doctor was called in. On the second day, I could not hear from my left ear. A few days later, one eye became badly inflamed. No sooner did that clear up, when the other eye became inflamed; it also cleared up. This happened once more to each eye in the first two weeks. During this time, the hearing in my right ear had started to diminish.

After two weeks, my family doctor called in an ear specialist who had me admitted to the hospital. When I entered the hospital, I was not able to hear anything and had to rely on lipreading to communicate. Fortunately, I was an 'instant' lipreader but I had difficulty lipreading doctors with a foreign accent. During my hospital stay, I was X-rayed and given numerous hearing, balance and vision tests. Vitamin therapy was tried, but without results. After three weeks, I left the hospital unable to hear a sound -- with the diagnosis 'unknown' and the hope that my hearing would eventually return.

After four months, still hoping a miracle would restore my hearing, I finally agreed to be fitted with a powerful hearing aid to make use of the small amount of hearing remaining in my right ear. I remember being able to hear on the phone with difficulty using my new hearing aid. During this time, I studied lipreading privately for 6 months with an audiologist who was herself hearing impaired. My teacher became my mentor, my close friend and later my colleague. It was because of her that I became a lipreading teacher 30 years later and taught for ten years. Seven months later, I returned to the workforce.

One year after my sudden onset of deafness, I found I could no longer hear with my hearing aid. An ear specialist diagnosed the cause as hydrops, a fluid problem in the inner ear. For one year, I went without a hearing aid, relying completely on lipreading. By chance, I met a hearing aid dealer who sold me a more powerful hearing aid, which allowed me to hear my own voice and a few close range sounds. Thus began a 40-year span of hearing aid use with various hearing aids. So profound was my hearing loss that I had no measurable hearing when tested on an audiometer. 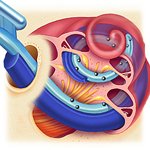 I continued using a hearing aid in my right ear until I received a cochlear implant in that ear 41 years later. Before receiving the implant, I underwent testing to find out if I was a candidate for a cochlear implant. At this point, I learned the cause of my deafness had been Cogan's Syndrome, an autoimmune disease. Balance tests showed I had no inner ear vestibular function and that I compensate for lack of this with my eyes. Five years later I made the decision to undergo cochlear implant surgery and received a Clarion S-series device. After healing for 6 weeks, I was 'hooked up' to the external equipment consisting of a headpiece and a processor. During the hookup, the first speech sounds I heard sounded as if they were coming from Mars. But after 5 days of programming, also called 'mapping,' speech began to sound more natural, although somewhat electronic. After 41 years of near total deafness, my cochlear implant allows me to once again hear on the phone, enjoy music, hear environmental sounds, and communicate more easily. Needless to say, I am thrilled with my newfound hearing and consider my cochlear implant a miracle device.